The Art of the Airport Tower & Istanbul New Airport 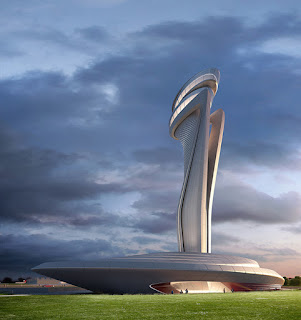 Carolyn Russo, a photographer at the Smithsonian's Air and Space Museum (Washington, DC), spent the last decade training her lens on 100 towers in 23 countries. "Airport towers are symbolic," she says. "They are cultural greeters... they are choreographers." You may watch the video about her exhibition filmed by Allen McGreevy, edited by Bill McKenna at bbc.com When I was working for Abu Dhabi Airports Company, we were using the Arabian Dhow inspired ATC Tower of AUH , as a symbol of the airport. So I agree that the ATC Tower of an airport is more than a control tower. Meanwhile, results announced for Istanbul New Airport’s “Air Traffic Control Tower Design Competition”  Tower inspired by tulips  World-renowned figures competed to design Istanbul New Airport’s “Air Traffic Control Unit”. AECOM and Pininfarina won the competition with a design inspired by tulips, one of Turkey and Istanbul's symbols. Results are announced for Istanbul New Airport’s Air Traf
Yorum Gönder
Read more »

Aralık 16, 2015
Skift.com has found ten innovative trends that reveal a better future for the industry and are set to make air travel more pleasant for passengers in 2016 and beyond. Here is the list with my comments on each trend; 1. Launch of A350 Aircraft and 787-9 Dreamliners – I definitely agree on this. I had a chance to experience 787 of Qatar Airways back in 2013 and looking forward to flying with the A350. 2. Rise of Biometric Kiosks and Passport Apps at Airports – E-Gates of Dubai and Abu Dhabi were my favorite time savers while I was living in the UAE. This trend has to be supported by all parties. There is one issue to tackle; visas. 3. Improved Onboard Wi-Fi and Streaming Entertainment – As a sit back-relax-enjoy type of pax, I rarely watch a movie. I like the time spent on board, which gives you a break to think about anything. Therefore, I don’t care an improved Wi-Fi. 4. Apple Watch and Apps – Again, as someone who doesn’t wear a watch, I am not fond of Apple Watch. Apps are a di
Yorum Gönder
Read more »

Next week IGA, the company behind the Istanbul New Airport Project, is going to host the Airport Council International - ACI Airport Exchange event in Istanbul. In addition to the 6 regular specialist ACI Airport Exchange conferences, this year there is a special dedicated 'Istanbul New Airport Development Conference' which is entirely dedicated to the €10.2 billion Istanbul New Airport project , featuring key figures from the leadership, design, and procurement teams delivering this game-changing mega-hub. Have a look at the official event website and join us if you're interested.
Yorum Gönder
Read more »
Diğer yayınlar